Those thinking of travelling to Spain by ferry usually think a short haul flight or driving through France are the only options. But there’s a surprising number of direct ferry services from the UK to the North of Spain, giving travellers an alternative option that allows them to bring their car without the hassle of driving across France.

There’s only two British ports serving Spain: Plymouth and Portsmouth. Of the two Portsmouth has more ferries and more destinations, although Plymouth has a slight time advantage over its more Easterly rival. All services are operated by Brittany Ferries, but despite there only being one service operator you can still find good deals by comparing different routes they offer. 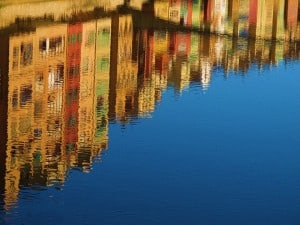 Portsmouth’s service to Bilbao offers up to two crossings per week, each of which take at least a day (24 hours) to arrive. A slower service also operates which takes 32 hours, and sailings take place on Sunday evening and midday Wednesday. Bilbao is the capital of the Basque region and is an important cultural centre. In recent years, it has become increasingly popular as a destination in part thanks to the Frank Gehry designed Guggenheim Museum. Bilbao is the closest port to France and Andorra, making it a great option for those whose final destinations are here or in Spanish destinations nearer Zaragoza or Barcelona. Many take the ferry here to go to the resort of San Sebastian. Prices for crossing and two birth cabin start from around £350.

Santander is better served, with both Portsmouth and Plymouth offering services to this destination. The Plymouth to Santander service takes 19 hours and 30 minutes but only operates infrequently. Portsmouth meanwhile offers up to three crossings per week, although these take at least 23 hours and 30 minutes. Due to the length of the crossing Brittany Ferries provides services such as restaurants, a cinema, pool and sundecks on board ferries on this crossing. Santander isn’t too far from Bilbao, but has road links that better serve areas in Western Spain and Portugal. Santander itself is also a destination with popular beaches such as El Sardinero and Los Peligros. Ferry services depart in the late afternoon on Tuesdays and Fridays. Prices vary depending on season and cabin, but you are realistically looking at around £300 for a crossing with two berth cabin.

Given the length of the services it is advisable to book a cabin aboard the ship to sleep in, as even the shortest service takes 19 hours and 30 minutes. If you haven’t slept on the boat, you may find yourself too tired to drive at the other end, which could be especially dangerous if you are not familiar with Spanish roads. Inside cabins are cheaper than those with sea views, but given the entertainment options on board the ship you’ll likely only spend sleeping time abroad your cabin.

If you are on a budget and looking to save money, it’s worthwhile comparing the cost of taking the ferry to France then driving to your final destination in Spain. Remember to factor in the additional cost of fuel and hotel on route when comparing these options.