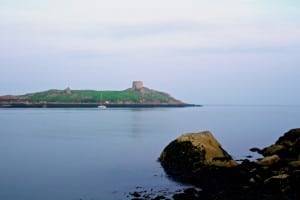 While France benefited from the Eurotunnel offering an alternative to taking the Ferry, those travelling to Britain’s closest neighbour, Ireland, from Britain have been limited to just ferry or aircraft. Thankfully there’s a large number of ferry routes to choose from, so no matter where you are in Britain or Ireland you’ll find one convenient for you.

Wales has ferries serving Ireland from several ports along its coast, although routes are limited — you can not take a ferry to ireland from Swansea to Dublin for instance, while Holyhead doesn’t serve Cork. With the exception of Holyhead on Anglesey, there’s only one Irish destination for each Welsh port. Holyhead technically serves two: Dublin and Dun Laoghaire, however, in practical terms these Irish ports are close enough together to serve the same final destinations. There’s up to six crossings per day from Holyhead to Dublin, and the scheduled crossing time is from 1 hours 49 minutes with Irish Ferries, while Stena Line offers a slower service to Dublin, which takes 3 hours and 15 minutes and crosses up to four times daily. Fishguard and Pembroke, both on the ‘Pig’s Snout’ of Westernmost Wales both serve Rosslare. Rosslare is a small port not far from Wexford, and is your best option should you be travelling to Waterford or Kilkenny. Swansea meanwhile serves Cork, which is the Southernmost ferry destination Ireland.

England is comparatively badly served with only Liverpool serving the Republic of Ireland, with a service to Dublin. Currently, there’s up to three crossings per day, each taking 7 hours and 30 minutes. For most in or near Liverpool travelling to Holyhead will be a quicker option. There’s also a service on Stena Line to Belfast, which has an approximate crossing time of 8 hours and sails up to twice daily. Until 2010, there was also a ferry between Fleetwood in Lancashire and Larne in Northern Ireland, but this has stopped sailing.  It is also possible to take an indirect ferry to Belfast from Heysham in Northern England via Douglas on the Isle of Man. While this route is longer due to first travelling to Douglas, it can be quick for those travelling from or to certain locations in the British mainland than alternative routes.

Scotland has long had close ties with Northern Ireland, so it’s unsurprising that it is one of the best served parts of the UK for ferries to Ireland. No ferries operate between Scotland and the Republic, but those travelling to the South will find it quicker to drive from either Larne or Belfast to their final destination anyway. The furthest North of the Scottish ports serving Ireland is Troon with a service to Larne. This is the closest port to Glasgow and Edinburgh, the two main population centres of Scotland. Larne is also served by the Scottish port of Cairnryan, which is located close to Stranraer. From Cairnryan, you can travel to either Larne or Belfast. There’s up to seven daily crossings to Larne, which take around 1 hours 45 minutes each.