Taking the ferry to Northern Ireland from England or Scotland offers all the convenience of bringing your own vehicle with speeds that almost match those of flying when airport check in times are accounted for. It’s no wonder that thousands take the ferry to Belfast or Larne every day from ports in Scotland and Northern England.

Those travelling from England can now enjoy a direct trip from Liverpool to Belfast. Stena Line operates the crossing, with up to two ships setting sail daily in each direction, with an average duration of eight hours. Foot passengers are welcome, along with those travelling by car. The crossing includes Free WiFi and many facilities, ensuring that, despite the length of the crossing, the journey will fly by. Heysham in the North West also serves Belfast on Stena Line, although the route is infrequent and typically used for freight purposes.

Cairnryan in Scotland near Stranraer is an alternative port serving Belfast, convenient for both Scottish and Northern English travellers. The crossings here are significantly quicker than the Liverpool route, taking around 2 hours and 22 minutes on Stena Line, with up to six crossings in each direction daily. P&O Ferries also operate a ferry to Northern Ireland from Cairnryan, but their service goes to Larne, which is to the North of Belfast. Despite the longer distance, the crossing is quicker – taking just an hour and 45 minutes. There’s also up to seven crossings per day in each direction, making Cairnryan by far the best English port for journeys to Northern Ireland. 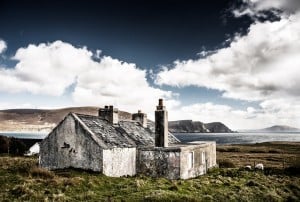 For those taking the ferry to Northern Ireland from Glasgow or Edinburgh the easiest port to reach in Troon, which is located very close to Prestwick Airport near Ayr. P&O Ferries operates a service from the port which takes 1 hours and 50 minutes to reach Larne. Two crossings in each direction operate daily.

Those travelling to Northern Ireland from England or Wales might find it quicker to take the ferry from Holyhead to Dublin, before continuing their journey by land. While the journey at sea isn’t as fast as the Scottish routes, it is significantly quicker than the Liverpool to Belfast ferry and driving between England and Northern Ireland via Dublin and Anglesea is easy thanks to the North Wales Expressway and Irish M1 motorway.

For those with a sense of adventure, or who just want to try something different, taking an indirect ferry to Northern Ireland via Douglas on the Isle of Man remains a possibility. This route is operated by the interestingly named Steam Packet ferry company which operates routes from Heysham in the North West of England, Liverpool and Birkenhead to Douglas, then onward ferries to both Belfast and Larne. This gives you the opportunity to explore the curious, independent island located in the middle of the Irish sea.

Whatever route you take, you’ll find that all ferry companies offer luxury ships with facilities such as lounges, bars, restaurants and even on some ships free WiFi. Taking a ferry to Belfast or Larne is far more comfortable than flying and offers all the convenience without the stress of going through an airport.