The Isle of Wight is one of the most popular holiday and day trip destinations for families in the UK. Since the Victorian period, many Britons have hopped on ferries across to the small island to enjoy its famous beautiful beaches and vacation spots. The island also plays host to a major music festival in the summer, along with the annual Cowes sailing event.

There are several different route options for those planning a trip from the mainland to the Isle of Wight, each catering to different preferences, with ferries leaving hundreds of times a day from the ports. Several of the ports that offer ferry services to the Isle of Wight are also very pleasant seaside destinations themselves, and can make for a lovely day out before boarding your ferry.

Ferry Routes to the Isle of Wight

To leave the mainland, there are several ports for you to choose from. For those looking for a port easily accessible by car from the rest of the mainland, the route leaving from the historic town of Portsmouth is a good option. Ferries leave from Portsmouth day and night and take as little as 40 minute to arrive in Fishbourne on the Isle of Wight. 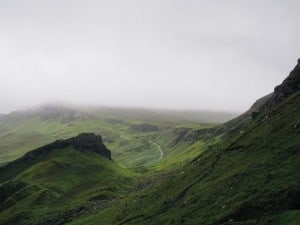 You can also catch a ferry to the Isle of Wight from Portsmouth Harbour to Ryde on a high-speed catamaran service with certain carriers, a crossing that takes only around 22 minutes and also offers a high frequency service of every 30 minutes at peak time between the railway stations in Portsmouth and Ryde.

Ryde is often known as the ‘gateway to the Isle of Wight’ as historically it was the most convenient entry point to the island from the mainland. It’s now a popular seaside resort, offering 6 miles of beaches. The water along the coast is famously shallow enough for swimming, making Ryde the ideal destination for those looking to escape to the island.

Just down the road from Portsmouth, about a mile away, is the town of Southsea. Southsea itself is a lovely tourist destination, featuring a busy town centre, an aquarium, a castle, a museum that tells the story of D-Day and a number of beaches for families to enjoy. There is also a convenient ferry stop in Southsea for those wishing to travel over to the Isle of Wight on foot. This ferry travels up to 34 times a day between the mainland and the Isle of Wight. This crossing is especially quick, taking only 10 minutes, and will take you directly to Ryde.

The small but very pretty seaside town of Lymington is the site of the quickest route for those wishing to bring their vehicles on board the ferry to the Isle of Wight and back. Once you’ve boarded the ferry at Lymington you can find yourself on the island in a mere 40 minutes, just enough time to enjoy a cup of tea and some lunch. There are beautiful, scenic routes from Lymington to Yarmouth with ferries leaving each harbour as frequently as 40 minutes apart. Yarmouth offers easy access to the stunning west coast of the Isle of Wight.

If you’re travelling with a vehicle, so long as it’s small enough to fit under a standard motorway bridge, you can use the ferry service travelling between Southampton and East Cowes, a port that offers convenient access on the roads to the rest of the Isle of Wight.