Ferry routes between Britain and Ireland are some of the most contested in the world, with a large number of big ferry operators offering connections between the two islands. Big names such as P&O Ferries are kept on their feet by smaller operations such as the Isle of Man Steam Packet, ensuring that service quality, crossing times and prices are kept at optimal levels for customers.

Despite the number of companies competing for your business, you’ll often find that on your specific route only one company operates. For instance, those travelling from Heysham to Belfast currently only have one operator, Stena Line. However given how easy it would be for passengers to choose a different route, such as Liverpool to Dublin or Cairnryan to Belfast the prices stay reasonable and the quality kept high.

Ferry Companies on the Irish Sea

Irish Ferries have long been the go to option for those travelling from mainland Britain to Ireland. They operate on two of the most popular routes, both of which incidentally run between Wales and the Republic of Ireland. Their main route is between Dublin and Holyhead on Anglesea, which includes a service called the ‘Dublin Swift’ which crosses the Irish Sea in just 1 hours and 49 minutes. Despite being built around speed, the ship also offers a luxurious crossing with on board features including WiFi, Brasserie, multiple bars, cafe, lounges, shop and more. Their Ulysses ship operates on the same service but takes 3 hours and 15 minutes to make the crossing. With the capacity for 1342 cars, this is service is the mainstay of the crossing. The ship is fitted with shops, eateries, cabins, lounges and even WiFi. The route is now also served by an Economy service on a ship called the Epsilon which despite the lower prices still offers free WiFi, restaurant and bar. The Pembroke to Rosslare route is served by their Isle of Inishmore ship that offers the same luxury as the Holyhead route. 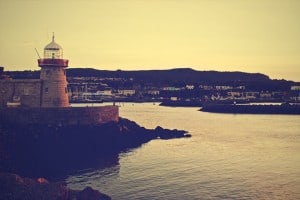 Stena Line operates crossings from Fishguard in Wales to Rosslare, along with Holyhead to Dublin or Dun Laoghaire just south of Dublin, as well as services from Liverpool, Heysham and Cairnryan to Belfast. They operate eleven ships on the Irish Sea, each offering quality service and facilities including free WiFi. Their Dublin to Holyhead route crosses in 3 hours and 15 minutes, the Fishguard to Rosslare route takes 3 hours, 30 minutes, while the Cairnryan to Belfast route is just 2 hours and 15 minutes. The Liverpool to Belfast route is more leisurely, taking eight hours.

P&O Irish Sea operate on three routes, two from Scotland to Northern Ireland – Troon to Larne and Cairnryan to Larne, as well as a Liverpool to Dublin service. P&O offer the best mix of luxury and speed on their routes, with even the ‘Fast Class’ Troon to Larne route offering facilities such as an onboard Costa Coffee. This crosses in just an hour and fifty minutes, while the Cairnryan to Larne route is even quicker, taking just one hour and 45 minutes. The Liverpool to Dublin crossing is 7 hours and 30 minutes.