Taking the ferry between England and Denmark involves visits to two ports that many people will never have heard of. The British port, Harwich, is located in Essex near Felixstowe, which is on the opposite side of the harbour. Esbjerg, the port at which the ferry arrives, is a small yet picturesque town of around 70,000 people located in the South West of Denmark. 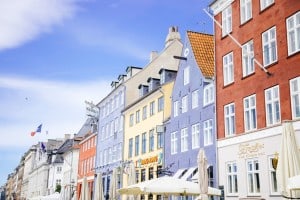 Esbjerg is Denmark’s main port on the West of the Jutland peninsula. It’s handily located almost due East of Copenhagen, allowing you to take the E20 road between the port and Copenhagen, crossing the sea via bridge twice and traveling through the city of Odense. You can travel onwards from Copenhagen to Malmo in Sweden, or alternatively switch to the E45 from the E20 while still in Jutland for destinations to the North or South, including in Germany.

Esbjerg itself is well worth spending time in and features a main town square which is both picturesque and a centre of cafe and bar culture. Other attractions in the city include the impressive and iconic Esbjerg Water Tower, completed in 1897. There’s also a Maritime Museum and Art Museum, among many other cultural attractions in the city. Those who fancy a spot of sport while here can visit the Blue Water Arena, which is the stadium of Esbjerg fB, a football club that’s a five time Danish Championship winner.

Esbjerg is also surrounded by impressive countryside, largely consisting of coastal flatlands. This is ideal cycling territory, making it a favourite destination for families teaching their children to cycle. Denmark is one of the safest places in the world to cycle, competing only with the Netherlands, meaning even those afraid of taking the roads in Britain can rest assured that they’ll be safe on their saddle here.

Harwich is a small town in Northernmost Essex with a population of just 15,500. Despite its small size, the town has historic roots and has hosted a naval base since 1657. The name of the town literally means Military Settlement in Old English! Much of the historic fortification still exists and make great places to visit, whether planned as part of your holiday or just due to having some spare time before ferry check in. Most impressive of all is the Harwich Redoubt, a circular fort which still retains original cannons overlooking the estuary.

Harwich has a unique architectural heritage which is immaculately preserved. You won’t find anything like it in the UK, and it’s somewhat surprising that the port hasn’t become more of a tourist destination. As well as buildings from as far back as the 1600s there’s also impressive buildings from later periods and styles including High Victorian and even impressive modernist buildings.

The port, Harwich International, is located to the North West of the town on the River Stour. It has a dedicated rail station for those not bringing a vehicle. For those arriving by road, the A120 takes you to both the town and the terminal, with the route to the port being along a dedicated road that can be reached from the St Nicholas Roundabout.